First Freckles (adopted!) , then Annie (foster fail!).  Now we’re honored to add another pittie-pal in need of a home to our blog.  This week, guest-blogger, fantastic pup-Mom and pibble advocate Valerie Fenton shares the story of a very special girl who is in need of a safe and warm foster home.

If you have room to spare, or you know people who are thinking of fostering and/or adopting, please share this post.  This little girl needs a friendly place to find her paws.  Is it with you?

FOSTER HOME NEEDED for the sweetest, quietest little girl, so she doesn’t get stuck in a kennel while she waits for her forever home!!!
On the cold afternoon of Sunday, December 15, 2013, Chris and I were driving into their neighborhood in Hyattsville, MD, when we saw this little girl running down the road — obviously scared, alone and hungry. Thus began a 2 1/2 hour pursuit to catch the little girl — while Chris pursued on foot, I drove the car to head her off before she could get to any major roads where she most certainly would have been hit by a car.
Chris found out from a few neighbors that the poor girl had been wandering the neighborhood for at least 3 freezing-cold days, eating whatever she could find on the street, and that even though phone calls had been made to PG County Animal Management…. no one had come to help her. After a lengthy and exhausting pursuit, the little girl finally snuck onto a large fenced in property, looking for some place safe to hide and rest. Luckily Chris and I saw this and tried to catch her. Eventually, after several phone calls to the police department, a kind animal control officer showed up to help. The little girl was finally caught when, exhausted, she went up to the property owner.
The animal control officer said she was sadly like many he has seen before — probably a mama kept in a yard by a backyard breeder, pumping out litter after litter for profit, until she outlived her usefulness and was dumped on the streets. The officer, the property owner, and Chris and I all agreed that she clearly was a very sweet little girl who just needs to learn how to be loved by humans, instead of used by humans. She had probably never known a kind hand. She had probably lived most of her life outside, instead of in comfort and warmth. What impressed everyone was how not once during the chase, even when we had our hands on her several times or had her cornered, did she ever try to bite or nip anyone out of fear. She encountered several dogs during the chase, and she went up to them, wagging her tail.
After she was caught, she was taken to Prince George’s County Animal Shelter, where the kind staff brought her into their office to help her learn to be around caring people. She was named “Yasmeen” (meaning: Jasmine). They said she was gentle and quiet, but she was blossoming the more she was around people. She rarely jumped — only to give a “hug” to a person.
This lucky girl had several people fighting for her — the shelter staff, Chris and I, and even the animal control officer. Everyone recognized what a good girl she is. Our efforts paid off, and a rescue, Partnership for Animal Welfare, took her out of the kill shelter. She was renamed “Jazzie” (the irony being that she is the calmest, quietest dog you will ever meet). She got spayed, was treated for a mild case of kennel cough, and has been recovering at the College Park Animal Hospital, where I take her for daily walks.

In only a few weeks, she has blossomed into the sweetest girl. Wags her tail constantly. Loves to give gentle hugs. Leans on your leg until she sinks to the floor for belly rubs. Patiently lets you shower her with kisses.
She seems to know to go potty outside — the vet techs say that she never has an accident in her cage… she waits until they take her outside to go to the bathroom. She is learning to love walks and is very patient while you strap on her harness and put on her jacket when its cold. 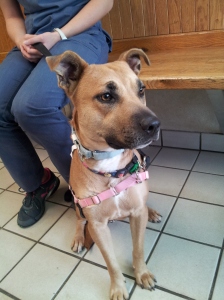 Not once has anyone heard Jazzie bark. Not a peep. She is truly the quietest dog, even when other dogs are barking at her.
She is learning how to interact with other dogs — she seems to respond best when slowly introduced to calmer, quieter dogs. Dogs that are very jumpy, get in her face or start barking at her a lot, seem to make her nervous. She has not acted aggressively to another dog.
Jazzie’s time at the vet is up, and because there is no foster available with the rescue at this time, on Saturday, January 18th she will be sent up to rented kennel space in Columbia, MD. Chris and I are sending out a plea for help because we have 3 dogs and can’t foster her. Jazzie is truly blossoming with the kind people she has been around these past few weeks… she needs to continue her socialization in a foster home, or better yet a forever home, with a kind and caring foster.
Please share her story and her pictures. She has the most beautiful starburst eyes and a gentle, old soul. She deserves a forever home, but at the very least, she deserves a comfortable foster home until she finds her forever home. 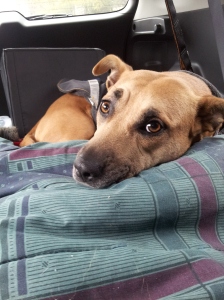 Jazzie is a spayed female. Small, @ 38 lbs. Short fur. Doesn’t shed much. Shepherd/lab mix.  Here’s her new profile on the rescue website: http://www.paw-rescue.org/DOGS/jazzie.php
If you have any questions or are interested, please email me at valeriefenton@gmail.com, so I can put you in touch with the rescue coordinator.