As you know, we rescued MJ from the Animal Welfare League of Arlington (AWLA).  They provided us with tremendous support and love as we brought home our second furbaby. They helped prepare us not only for life with a puppy, but for life with other people’s opinions about owning a pit bull.  MJ has become our most notorious family member and a true ambassadog for her breed.  It’s because AWLA set us all up for success.

Each year, the AWLA hosts an annual Walk for Animals.  From their event website:

The Walk for the Animals demonstrates the way pets enrich our lives and generates funds to help us sustain community programs and services offered through the League, such as our low-cost spay & neuter clinics,” said Neil Trent, president/CEO of AWLA.

But it’s really more than that.  It’s an opportunity for the AWLA extended family to gather together to raise funds and awareness for homeless animals, and the incredible work the AWLA does.  Alumnae and neighbors come together for a 1 mile stroll or 3 mile walk to celebrate animal rescue.  Dogs are welcome to attend, and cats and small companion pets are honored on t-shirts, stickers and posters.

This was the first year our little pack was able to attend (finally).  We joined the AWLA Pit Crew Team, set funding goals, and practiced our loose leash walking around the neighborhood.  A very, very special thanks go out to Chris, Kathy, Mark and Margaret for sponsoring us!!

On May 10th, we were more than ready!  The night before, we set out our gear.

And in the morning, with a very special guest, we piled into the car and headed to the park!

We registered, toured the swag booths and met up with the pack.  We were all to wear black, red and grey.  Zo wore his picnic-inspired bandana and MJ wore a Bacardi kerchief because that’s the only other red bandana we could find… she is a “woo” girl and it was nice weather, so it sort of made cosmic sense.  Then we hung out and waited for the walk to start. 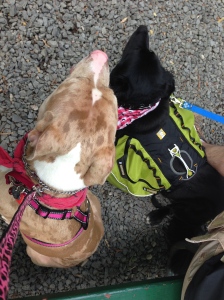 MJ opted to wait on a table, because the princess must be above everyone. She then fell off the table, because I’m a terrible parent and took my eyes off of her for two minutes to admire another dog. 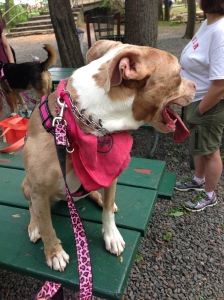 It’s cool though, because my mom came with us (special guest) as another set of hands and chief photographer.  MJ found respite and much belly-rubbing after her tumble with mums.  PS:  Miss is totally fine.  She landed on all four feet like she meant to jump down.

That’s my mom. You can tell we’re related because she has purple in her hair.

The walk started… we opted for the three mile walk, because we wanted to get everyone good and exercised.  And we also promised that we’d get as far as we could until someone had a melt-down and it was time to go. 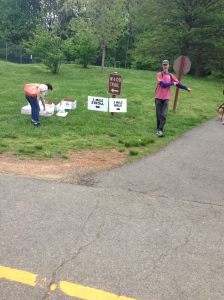 Of course… you could go both ways. Volunteers directing walker traffic!

Along the way, there were watering stations, baggie drop bins, volunteers with cheers and pets, and your friendly local law enforcement to help these chickens safely cross the big road. 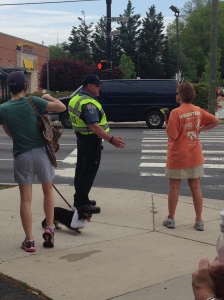 The pups did really well, and we made it through 3 miles without hurt feelings or “please pick me ups”.  We reinforced some of our on-leash skills, which haven’t received too much attention because we rarely get out in very populated, high foot-traffic areas.  We also reintroduced our “3 second greeting” rule: say hi, sniffsniff, keep trucking.  It’s good for humans and furries alike.

And when it was over and we were home and clean, everyone tucked in for a well-deserved nap.

We learned today the the Walk attracted 700 people, 200 dogs and raised nearly $90,000 for AWLA. We’re happy to have been a small part of that, and look forward to doing it all again next year! Speaking of, they have announced the date for next year as May 9th, 2015, better put it on my calendar…

3 thoughts on “Giving back”