*they say “barked at”; i say “defended them from.”  we apparently have to agree to disagree.  (i’m right).

-momma and mums leaving for the store

-momma and mums returning from the store

-the gate swinging in the wind

-birds in the yard

-momma going out for coffee

-dad walking up the stairs

-dad leaving for a meeting

-bubbles in the tub

-the neighbor dog out for a walk

-dad coming home from his meeting 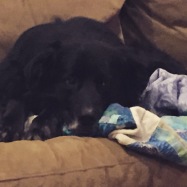 We have a problem.

No, this really feels like a problem. And I’m putting it out to you, dear readers, for help.

Zozo, who is scared of his own shadow, has started speaking up. Not just speaking up, yelling.

FedEx truck pulls up?
“GUYS!! GUYS!! THERE IS A TRUCK IN OUR TERRITORY. WE MUST SHOUT AT HIM UNTIL HE RETREATS. SHOUT WITH ME!”

A doorbell rings on TV, and he loses it at the door (note: we don’t have a doorbell. We have a knocker. Let’s not even talk about that.) A car door slams and he can see it’s me or James, he wigs. MJ chortles in her sleep; WOOF WOOF.

I’ve read around, but…. Who has suggestions? Have you tempered your barker?