Zozo loves his new food.  He scarfs it down and burps his approval.  In fact, burping in our faces has become his favorite morning party trick.  To be clear, nothing is less “rise-and shine-y” than a border collie gracing you with warm kibble breath belched up your nose.

He’s making pals with the dogs on the other side of the fence and getting accustomed to the flow of the new neighborhood.  He’s calming down.  We’re relieved.

But pet ownership, like home ownership, means that once one issue is resolved another creeps up.  Or maybe that’s just my luck. 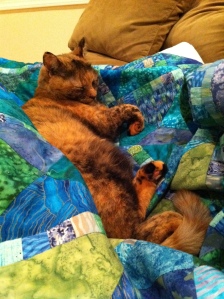 Athena has always been fond of lurking in the basement.  From her perch on the bookshelves, she can scoot upstairs for food, hunt spider crickets as they spring out of thin air, or hop on over for a leisurely visit to her litter box.  Her box is stationed in a guest bathroom.  She knows where to find it.  She’s awesome like that.

Except for some reason, our 7 year old fuzzybutt doesn’t want to use her litter box anymore.  Poops still end up where they should (hooray!).  For everything else, she’s chosen the corner of the basement just outside the litter box bathroom door.  On carpet.  We go through baking soda, vinegar and Anti-Icky Poo to kill the enzymes and the smell, but she gingerly picks a spot beside a recently cleaned area and reclaims her territory.  Medically, there’s nothing wrong with her.  We throw down towels and tin foil, and move her litter box out.  We buy a new litter box.

That seems to do the trick.  For a week, my sniffer’s not picking up ammonia.  I happen to breathe a sigh of relief and mention to James that we might be out of the woods.

Oh, silly woman, have you learned nothing?

I’m taking down some laundry and I step in a puddle.  I’m so grossed out/surprised, I drop the clothes.  Because this girl just can’t win.

Not long after, we happen to be outside playing ball with Zozo when Neighbor leans across the fence to chat. (PS, does anyone else have a neighbor who stops to chat and sucks up 45 minutes of your life?  Vampires.  Suburban Vampires.)  In a moment of weakness, I confess Athena’s urinary misbehavings, and Neighbor scratches his chin, flicks his ciggie, and ruminates that maybe it has something to do with the previous owner’s Saint Bernard who may or may not have passed away in “that very corner you’re describing.”  I can’t even begin to unpack everything in that sentence, but I know what I have to do.

On the way back into the house, I stop in the garage and pick up an industrial trash bag, gloves, a hammer and a utility knife.  I close Athena in the powder room with some catnip and I crate Zozo. I relocate her litter box.  I pull on long sleeves and solid shoes.

And I proceed to tear up the basement carpet.  I start on the marking corner.  Up comes the carpet.  Out goes the carpet padding.  I pry away the carpet tacks and tack boards.  I wipe everything down with vinegar.  All of the evidence of my handiwork (except the big, naked corner that’s now half the length of the basement) is bundled into the bags and hauled out to the curb.

One week later, I wipe down the corner again with a natural enzyme cleaner and we put the litter box back.

And then we wait.

Weeks pass.  Months.  No kitty “accidents”, intentional or otherwise.  Occassionally we’ll catch Athena sniffing around the site, but she hussy-walks over to her box and makes herself comfy there.