We went to Cuba.  It’s a magnificent and startling and complicated place.

Doodle went to camp for his own adventure.  We missed him, but we were lucky to have a house-dog.  Our casa, the large house in which we rented a room, has a wiggly boxer named Pike who is curious, sweet and extremely well-behaved.

He’d greet us in the morning and when we returned from the day’s excursions.  We brought in smells from America as well as places in the city he’d never visited.  We hadn’t expected to have a trip mascot, but he was a wonderful surprise.

Something else we didn’t expect– that we didn’t know to ask about in advance to emotionally prepare for– were amount of stray animals.  Because why would we?  How would we know that we’d see dogs and cats, puppies and kittens roaming around appearing generally well-fed but still showing the wear-and-tear of street living? 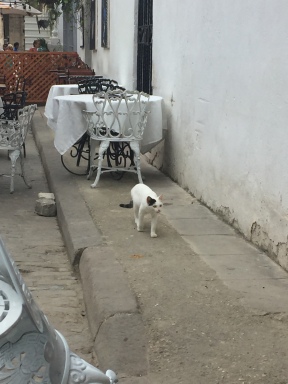 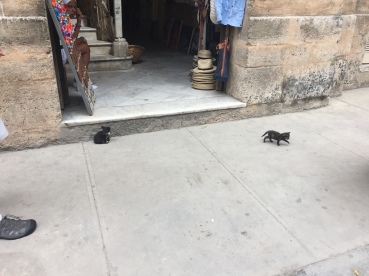 Some of them joined our tours for a stroll around a square and or exploring Hemingway’s Finca Vigia, vocally letting our guide know how much they liked her explanations.

In some places, dogs wear string collars with index-sized cards attached, like the pup perched on James’ lap.  The cards are handwritten and include the animal’s name.  They mean that someone feeds the dogs regularly.  These animals are still strays, but someone nearby looks out for them.

And yet, with so many animals in need of homes or stability, puppies are sold on the street, costing more than the annual salary of local doctors. 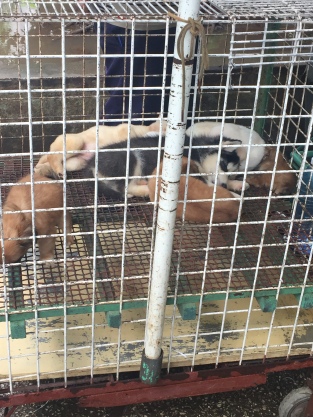 In Cuba, there is veterinary care.  There is a spay and neuter program through animal welfare groups to try to control the stray population.  There is no such thing as dog food:  domesticated animals like Pike eat whatever their humans eat.  Pike’s breakfast was an enormous portion of freshly cooked rice and boiled beans, and sometimes chicken.  Cubans who own pets or who take care of them share their monthly food rations with them.

Together, James and I took close to 400 pictures.  So many are of the animals that hang around public spaces solo or in packs, calmly approaching humans for food or affection or sniffs.  Sleeping.  Prowling.  Co-existing with the bustle of the city.