When Zozo was a puppy, James and I agreed- we made a pact!- that we wouldn’t give him food from the table.  There’s too much that’s not good for his stomach, we said.  We don’t want to encourage bad habits.

Athena was already spoiled by nibbles of corn chips and burnt french fry bits from Five Guys.  We had a second, temporary rescue cat that would snatch whole cheeseburgers from plates and try to make off with scrambled eggs.

So with Zo, no meant no.  Except for maybe just a corner of a pancake (“He asked if he could taste it!”).  Or a bite of pizza crust (“No, see, it fell on the floor and he got it before I could pick it up!”).  Or baby carrots and green beans (“There are vegetables in his dry food.  See, there’s a picture on the back by the ingredients of what I think are veggies.”).  Or inches of apples.  You see where this is headed.

When MJ came home, we redoubled our efforts.  No people food.  None.  She wasn’t interested in food anyway, so fine.  She was, however, interested in smelling it.  We’d make dinner and she’d pad around the kitchen, snout in the air.

“What are you choppin’?”

“What’s that you pulled out of the fridge?”

“Is somethin’ bakin’ in the oven?” 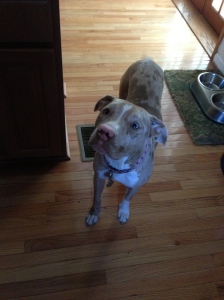 Snout up, snout down, snout where it doesn’t belong.

Zo would hang out under the breakfast bar, waiting.

Because he knew. He could sense it.  It was in the air, like the warming naan or the baking chicken or the dishwasher detergent.  Mama’s weakness.

If there is something plain, unseasoned and ok for furbabies, Mama will share.  That’s the number one household rule:  Mama always shares.

Our dogs don’t beg.  They don’t whimper or whine if we’re eating and they’re not.  But they line up, bums on the floor in a perfect sit, and accept an offering like communion.  And then they scoot away.  If there’s nothing for them, they get a treat and then retire to their beds.  It’s now routine.

Is there anything, dear readers, you promised you wouldn’t allow as a furparent that’s completely gone out the window?  Am I alone?

On a particularly lazy Sunday, we huddle in the house waiting out a summer storm. James makes a killer grilled cheese sandwich, and he’s been begged into submission and is shuffling around the kitchen making our lunch. Pans clang, burners ignite.  Out comes the bread loaf, cheese slices and butter.  The commotion draws Doodle’s attention, and he becomes the instant helper by standing right behind James while he works.

MJ snores on the couch, indifferent to the activity in the next room.

James peels open the Kraft American Cheese Singles slice.  MJ bolts into the kitchen. There’s something about that plastic noise that has her unsettled.

Zo shifts his settled position into the middle of the kitchen, and MJ begins duckling-stalking behind James as he moves from counter to cook-top.  She steps on/over Doodle.  Ears pert, eyes open, sniffing the air.

Without thinking about it, James takes a small corner of cheese and offers it to Zo.  MJ erupts in her Brontosaurus whine.  How dare she be overlooked and unoffered.  She screams for her fair share.

From the other room, I can hear her butt hit hard on the floor.  She slurps the cheese down.

From the couch, I hear the jingles of the furbaby stampede.  “Sit.”  Two dog rumps thwap the ground. 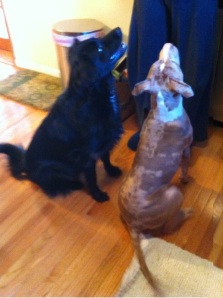 Ladies and Gentlemen: we have a winner.

This Girl will do anything for Kraft singles.  It’s her Klondike bar; her holy grail.  Within a week, she’s mastering her cues for a tiny nibble of cheese.

We replenish our stock, but this time with the white singles slices (which I prefer).  MJ won’t take them.  She turns her snoot up and sulks away.  Back to the store we go.

Only the yellow slices for this princess.

If there’s one phrase you hear in our household on a daily basis, it’s “I could eat.”

Wanna meet friends for second lunch? I could eat.

Let’s try the new fro-yo place around the corner. ICE.

The Little Girl, on the other paw, is not interested in food.  There have been too many mornings when James and I switch off getting ready for work, with sitting on the floor feeding MJ her breakfast– by hand– one kibble at a time.

“No thanks, Mama.  I’m gonna goat this grass and ignore you.” (NOTE: if you can imagine hearing GWTW’s Scarlett or Steel Magnolias‘ Shelby, you’ve got MJ’s voice. Yes, I’m serious.)

Our training progress with MJ is, predictably, slow.  Zozo, however, is putting on some padding because he responds to our training cues like a champ.  Because, like his parents, he could eat.

Internet chat boards aren’t much help.  The vet is convinced MJ will come around.  Or not.  “She might just be one of those dogs.”

And so, dear readers, how have you enticed a puppy who is utterly indifferent to yummies?

“James, when did you drop food in Doodle’s bowl?” I’m in the kitchen unpacking groceries, while James and Zozo watch something science-y on television.  Zo picks up his head while thwacking his tail at the mention of his name. Two more thwacks, and then he drops his chin back on to James’ feet. (“oh hey, mom. boy time.”) Chopped liver, I get it.

“He hasn’t touched it. The water’s gone, but the food bowl is full.”

In the just-over two years since we rescued Zo, never once has he skipped a meal. He’s the definition of food motivated. There’s an alarm in his belly that sounds “I could eat” whenever someone breathes in the direction of the kitchen. The warning bells go off in my head, but I take a breath, shoo Athena off the counter, and finish the chore. I don’t want to be the mom who overreacts.

Next morning, yesterday’s food is still in his bowl, except for the bits scattered about the kitchen during Athena’s midnight shenanigans. We toss the old food, give the bowl a rinse, and replace it with new food. I even sneak a little bacon grease into the bowl to entice Zo. He sniffs at it, wet-vacs his water, and slunks back to his new favorite spot between the couch and the coffee table. He huffs and drops into “down.” His eyes moon in my direction. Something’s up.

“Maybe he got into something outside? Did he get anything off your plate?”

“He’ll eat when he’s hungry, Kari.” I got called by my first name. James is serious.

I chat with my mom during the day, and when she asked after the furbabies I nonchalantly mention that Zo didn’t eat two meals and maybe he’s depressed or something. She laughs (in the way only a mom can laugh and make you feel better/a little foolish) and reiterates the same sentiment: “Maybe he’s not hungry. He’ll eat when he’s ready.”

I boil up chicken for dinner, and he takes two little bites and sulks away. Something is definitely going on.

After everything with the leash walking and the anxiety and the terror of the world, we thought we might have entered into a period of quiet stability. Silly us.

I do what any rational Type-A woman does: I Google. I scroll through Yahoo! Answers crap, skim some excerpts from dog magazines and land on a veterinarian-moderated forum. Page after page presents possible answers: stomach cancer (holy collie…), the food’s gone bad or is too close to a trash can (weird smell) or it’s stress.

Stress. Of course. We moved. We had a roof leak right after we unpacked. We have neighbors who have dogs who bark. There’s a slightly new routine and more rooms to explore. New sounds and smells. We didn’t think about it, since he’d made the move from the urban-village apartment to the rental house with such finesse.

According to the vet from the post, the best option is to switch up our usual dog food with something a little higher-end. (In retrospect, I think the vet may have been in someone’s pocket.)  We head over to the store with a plan to buy a small bag of the most expensive dog food on the shelf. We bring it home, scoop out a serving and wait.

Pupper makes his way over to his bowl and sniffs. He looks at me, at James and back to the bowl. He inhales. It’s like we never put food in the bowl. Two more days of the good stuff, and we start to wean him back to his normal food by mixing in the fancy kibble with his usual food. And wouldn’t you know: he eats around the old food. Oh no sir. No. We add more old than fancy food for the next meal, but he does the same.

It’s done and we can’t convince ourselves to fight him. He burps his delight.

Zo’s got expensive taste. Can’t blame him for that. Although our monthly food budget for the family has just increased significantly… I somehow feel outsmarted by my dog.

Now that Zo’s eating, it feels like things are getting back to normal.